To be short and sweet, the idea behind ISR is to teach babies (beginning at 6 months old) how to float.  It is really hard work for the child, but it is a huge commitment from the parents too, as these are just a few of the requirements:

Seriously, for six whole weeks, every Monday through Friday at 6:10pm, Sophia and I drove to a neighborhood about 15 minutes away from our house for her swim lessons.  I plopped her in a pool with a lady she didn’t know, she screamed her head off the entire time, then stayed mad at me at least until we got home and I gave her a snack.  I sometimes had to make special meals for her if she wasn’t allowed to eat what we were having.  I did more loads of laundry those six weeks than I usually do for her for three months (we had to bring at least two towels to every lesson).  I had to pre-plan our schedule every day so she would eat, drink, and nap at a certain time.  It was overall a pretty big pain in the neck.  But you know what?  The peace of mind I now have that if (God forbid) my little girl were to ever fall in the pool, she could save her own life…was worth every ounce of extra work and effort it took to get her through lessons. 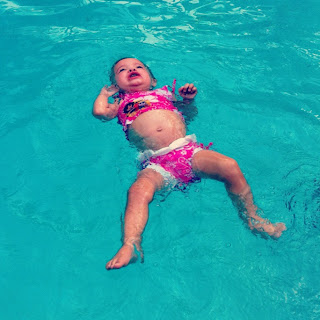 Sophia about 4 weeks into swim lessons

Sophia wasn’t able to start until she was 11 months old, because of the huge waiting list in our area, but they do start babies as young as six months old.  ISR certifies instructors (so I was told, many of them are nurses and teachers who do this as a side job) to teach these babies and they do lessons at their own homes, for the most part.  At 6-12 months old, they teach babies how to orient themselves and float until someone comes to their rescue, no matter how they enter the water (head first, on their belly, etc.).

After six weeks were up and her instructor felt confident that she had mastered everything she had been taught, I brought her in the next day with a summer outfit on (no bathing suit), sandals, and a regular diaper (no swim diaper).  She did perfect, so the following day, I brought her with “winter” clothes on, which included a shirt, hoodie, jeans, and sneakers.  Give me a break, we live in Florida!  Haha.

According to her instructor, the winter clothes most often give babies a problem, because not only is their diaper filling up with water, but so is the hood of the jacket, which drags them down. Being in her heavier clothes seemed to have really no effect on her and she did perfect once again, so the following day we had her final lesson, and she was an ISR graduate!  I was so nervous throughout her whole six weeks of lessons that Sophia would start to hate the water because every time she went to a lesson, she literally cried the entire time.  But at this point, although she is still a little clingy sometimes, she is liking it more and more every time we take her in the pool.  She is starting to realize that every time she gets in the water, it doesn’t necessarily mean she will be thrown under and forced to float by herself.

Next year, probably around March, Sophia will go back for a “refresher course” that they usually do for babies around 18-24 months old.  She will learn to float if she fell in, then turn over to her belly and swim to the edge of the pool and pull herself out.

I am so glad that we decided to put Sophia in these lessons and feel very confident that she could save her own life if ever anything were to ever happen that required it.  We will absolutely be putting any future children of ours in ISR, too.