First things first- Sophia loves bananas! She ate bananas Monday night and last night out of a jar, then tonight, I made some by mashing a banana, adding liquid, then putting it in the food processor. I hope she’s going to like fruits and vegetables a lot. Cesar and I both do, so hopefully that’s a good sign!

Well, sometimes Cesar and I aren’t in the mood for mashed bananas or rice cereal, so once in a while I like to make something different for the two of us. We eat chicken quite a bit, but this is one of my favorite recipes to make. It’s so easy, but really tastes like you spent hours on it. It’s one of the first recipes I made after Cesar and I were married. We had the best chicken piccata at our wedding, and we’ve both loved it ever since. I don’t know if anything could top the one at our wedding, but this one sure comes close! 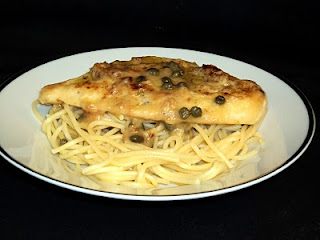 Butterfly chicken breasts and sprinkle with salt and pepper. Dredge in 1/4 cup of flour. Heat olive oil and 1 tbsp. butter over medium high heat. Put chicken breasts in the pan and cook until browned, or about 6 minutes per side. Set aside.

Add 2 tbsp. flour, 1 tbsp. butter, chicken broth, wine, lemon juice, and capers to the pan and deglaze. Cook until sauce heats up and starts to bubble. Put chicken breasts back in the pan and cook until heated through. Serve immediately over pasta.

I’ve been to Nashville several times over the past few years, but Cesar and I have been three times together.  It is a fun city to visit.  My first impression before even going there was that it was going to be all about country music, and while I am a country music fan, Cesar is not.  To my surprise, there is so much going on there, and you don’t even have to like country to have fun there!

We went in December, February, and July.  December and February were much more enjoyable weather-wise than July.  When we were there in July, the car said it was 110°, which just so happens to be miserable, even for us Floridians used to the heat. 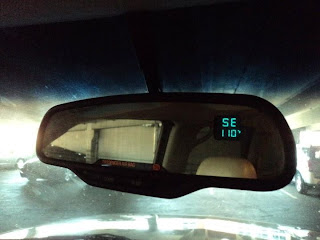 Where We Stayed:
Hutton Hotel has been our favorite of the places we’ve stayed in Nashville- what a nice hotel!  When we stayed there, we were celebrating a special occasion, and happened to mention it to someone.  When we got back to our room one evening, we had all kinds of snacks, desserts, and a couple bottles of local beer waiting for us.  They are also a “green” hotel, which is pretty cool.
Where We Ate:
What We Did: 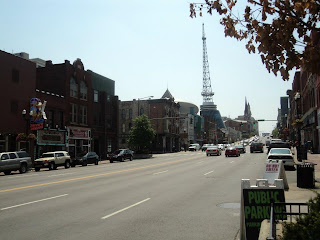 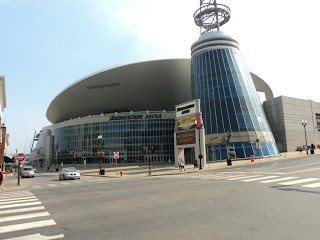 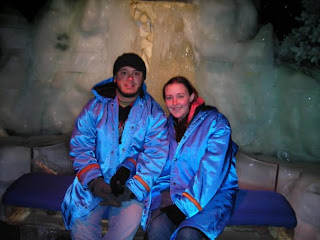 I love Nashville, but there are lots of things I haven’t seen there, so I guess we’ll have to go back sometime soon.  What else is fun in Nashville?

Since I love traveling so much, I am going to start doing some travel recaps of the places I have been and loved.

Cesar and I have been to N’awlins twice and it is absolutely one of my favorite cities we’ve visited.  There is just so much to do there.  If you are a foodie, New Orleans is definitely the place to visit- it was even named #1 in America’s Best Cities for Foodies by Travel + Leisure Magazine.

We’ve been twice (the first time was in August), but last time we went, it was over New Years- the end of December to the beginning of January.

Where We Stayed:
Homewood Suites by Hilton– we liked it.  There weren’t very many hotels with availability by the time we decided to go between people in town for New Years and people in town for the Sugar Bowl, so we had to take what we could get.  But we were actually really happy with it and would definitely stay there again.  It was within walking distance to pretty much everything. 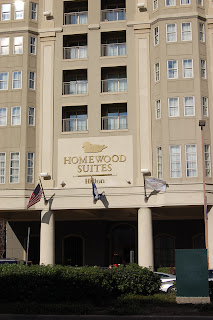 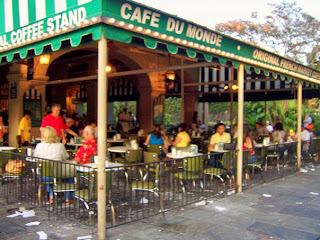 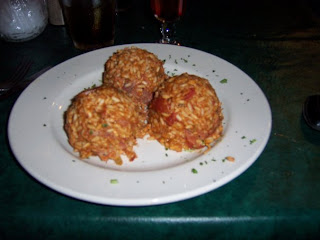 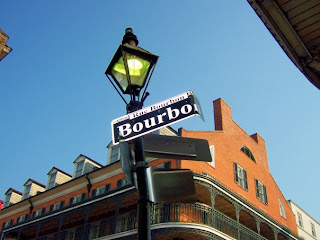 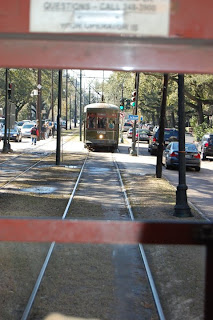 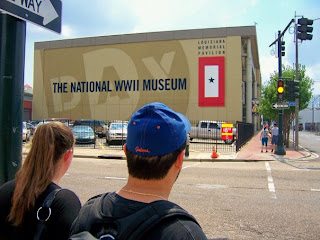 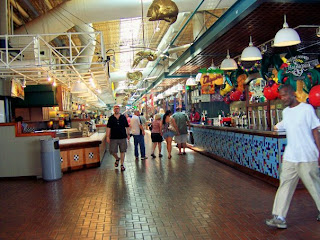 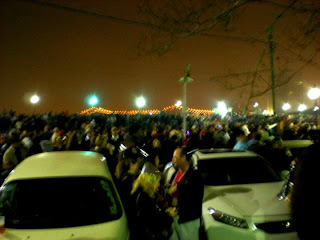 I’m sure I’ve missed plenty of places to go and things to do in this amazing city.  I’d love to hear if anyone else has been to New Orleans, what you thought of it, and what you did while you were there!

At Sophia’s 4-month checkup last week, the doctor said we should start her on food sometime in the next few weeks. She said to try giving her rice cereal for a week, then start introducing one new fruit or vegetable each week after that. On Tuesday evening, we decided to let her try a little bit of rice cereal for the first time.

I opened the box, and while I was trying to pour the recommended “approximately 1 tablespoon” for the first-time feeding, I proceeded to pour about two cup’s worth in a one-cup bowl. That extra cup ended up on my shirt and the floor. Oh, the joys of first time parenting. The next step- adding liquid until cereal reaches desired consistency- proved to be just as hard. I didn’t realize how much it would take to make it suitable for a four-month-old eating food for the first time. When I was finally happy with the result, about 10 minutes later, I asked Cesar if he thought it was okay, to which he answered, “Amanda, she doesn’t have teeth.” Who knew you weren’t supposed feed a four-month-old chunks of cereal?!

After adding some more liquid, we were ready to brave the first “real” feeding. We cleared off the kitchen table, brought in the baby and the Bumbo, and got ready. I would say she loved it right off the bat, but I think this picture of her first bite says otherwise. 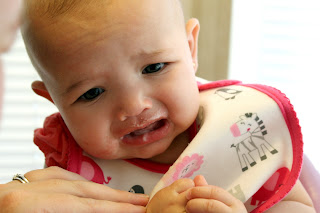 She wasn’t really sure what to do with the spoon, so she tried sucking on it like a bottle. When that didn’t work, she got frustrated. But after she got the hang of it, I just couldn’t feed it to her fast enough. 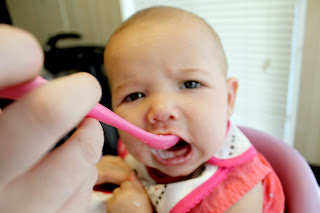 I’d say she only ate about a quarter-cup total, then drank a couple ounces of her bottle when she was done, but it was a good start. We’ve been giving her a little bit of cereal before her bottle once a day, and she’s getting much better at eating off a spoon already. Tonight we are going to introduce bananas…so I guess we’ll see how she likes that!

Saturdays in our household mean one thing…game day. We wake up in the morning, shower, and as quickly as we can, change into our Gator garb (although, I’ll admit, sometimes it’s hard to decide what to wear because of the abundance of orange and blue in our closets). Even Sophia has a whole Gator wardrobe to choose from.

This Saturday started out as a typical Saturday during football season. We slept in until 10am, got ready for the day, then laid around and flipped back and forth through about four football games we found on TV. Later in the afternoon, it was so nice outside, we decided to take a little break from football and check out a little fair that was going on nearby, before it was time to go our friend Tim’s house to watch the game. We walked around and smiled, nodded, and uttered “Go Gators” to anyone and everyone we passed by that even looked like they might be a Gator fan.

We left the fair, anxiously awaiting 8:00. We stopped by Walmart to buy beer (for Cesar) and Diet Coke (for me) to bring to Tim’s, then we were on our way. We ate tacos for dinner while we watched the pre-game show and waited for the game to start. When it was finally time for kickoff, we didn’t know what to expect…after all, Alabama has a great team.  After only 19 seconds of play, John Brantley threw a perfect pass to Andre Debose, who ran it into the end zone for a quick six. After a made extra point, Cesar and I were high fiving each other and were feeling pretty good about the rest of the game, while Tim and his friend Kathryn were pretty annoyed (they are both Florida State fans, which actually means they are a fan of anyone playing the Gators).

Well, it all went downhill from there. That would be one of only two times we scored the whole game (the other being a field goal), while Alabama continued to rack up the points. By half time, we decided to play board games instead of watch the game. We listened in the background, but playing Uno, Taboo, and Battle of the Sexes proved to be much more fun than watching the Gators get stomped by the Tide.

The final scored was 38-10 Alabama. But hey, the night wasn’t a total loss. At least us girls won at Taboo and Battle of the Sexes.  Plus, I am the mama of the cutest little Gator fan I’ve ever seen! 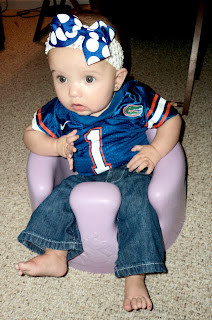 Welcome to “My Sweet Little Family”

Five years ago, I was a junior in college with a fairly new boyfriend and a party to go to every night. If you had told me that five years later, I would be settled down, married to my college sweetheart, and the mother to a beautiful little girl, I’d say you were nuts. At 20 years old, that kind of life was just not in my five year plan. I always figured I’d have a great career out of college, be married at 30, and have 2.5 kids by age 35.

I’m Amanda. After dating for three years, I married Cesar in February 2009 and we had our first daughter, Sophia, in May 2011. I want to travel the world. I’ve traveled quite a bit, but there are so many places I still want to see and someday, I hope to see them all. I am a Floridian, born and raised. Living in Florida, you have two choices- orange and blue or garnet and gold. And, well, garnet and gold just does not cut it around here. I am a huge Gator fan and luckily, they usually give us fans something to cheer about. I am a stay-at-home mom to Sophia at this point in time, and while I enjoy staying home with my little girl, I plan on going back to work at some point. I have a bachelor’s degree in health sciences, but have yet to do anything in the health sciences field.

I have thought about starting a blog for a while now, and have finally decided to do it. I am going to write about anything and everything I can think of and give you a glimpse of what it’s like to be me. I’ll try not to be too boring along the way. Sometimes I might post three times a day, sometimes I might not post for a week. We’ll see how it goes. I’d love to hear any feedback you might have as to how I can improve my blog, so please feel free to leave a comment!