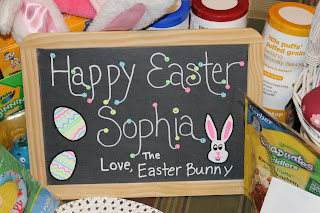 Well, a couple weeks ago was Sophia’s first Easter, and a fun Easter it was!

We had about 10 cousins from New York come down to visit during their spring break, so my Nanny had a houseful.  It was agreed upon by everyone that we’d have a low-key Easter…so beach it was!  We all met at Nanny’s church on Easter morning for Easter mass.  We went back to Nanny’s house for everyone to get changed into their beach gear and see what the Easter Bunny left for Sophia at Nana and Pop’s house (yes, the Easter Bunny visited Sophia at our house and at Nana and Pop’s house…lucky girl!).  He brought her lots of fun things to their house, so they brought it all for her to check out. 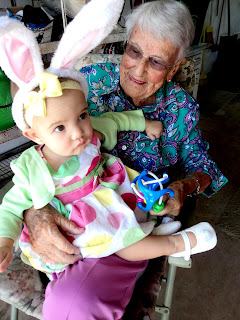 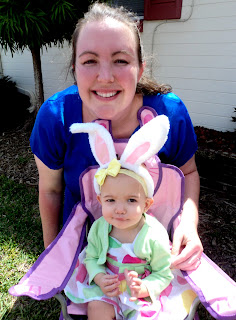 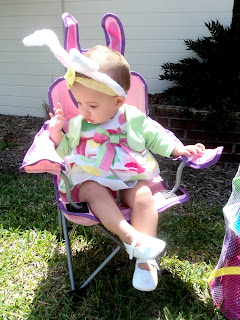 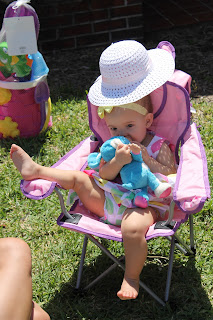 After getting bathing suits on and lathering up with sunscreen, we headed to the beach.  This was Sophia’s third time at the beach.  She’s liking it more and more every time we go, but it really tires her out, so she thought it appropriate to take a little mid-day siesta right there on the beach. 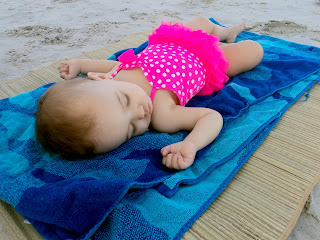 After about a thirty minute nap, she was ready and roaring to go again, so we went to the edge of the water and played, then came back up to the soft sand to crawl around some more. 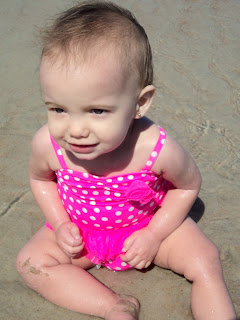 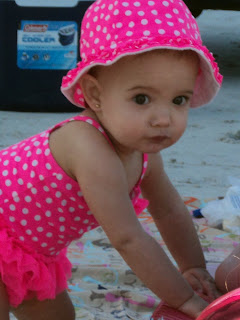 I’ll tell ya, that salt water will really wear you out though, because Sophia was ready to take another nap pretty soon. 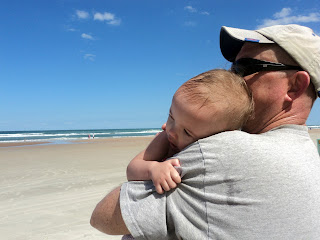 She fell asleep and stayed asleep until we got back to Nanny’s house for dinner. 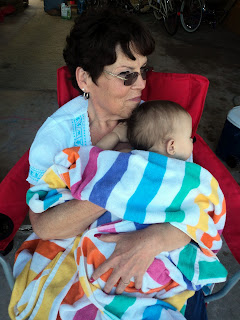 Finally, after a couple hour nap, she woke up and had all kinds of fun with her cousins she had just met a few days before.  She crawled around all over the house, jumped from arm to arm, played the piano, played ball, and quite a few other fun things. 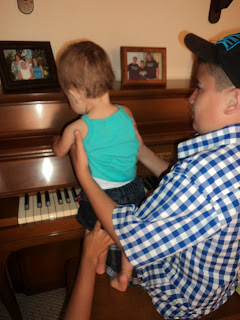 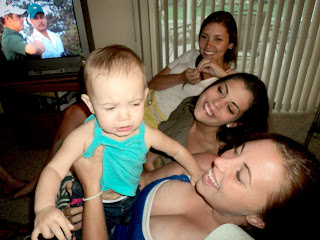 It’s funny how much more fun holidays are with a baby, especially at this really fun age.  Obviously, she doesn’t understand the concept of the Easter Bunny yet, but it sure was fun for us!  I ‘d have to say, this was the most fun Easter to date!

So, it’s official…Cesar’s getting old!  27, to be exact! His birthday was Friday, and we’ve been celebrating ever since.

Friday night, Cesar got to choose what he wanted to do for dinner.  I told him I’d make just us dinner, I’d make dinner for everyone, or we could just go wherever he wanted.  He chose Chili’s.  Um, ok.  Those 2-for-1s will get ya every time, I guess!  So we met Cesar’s parents, my parents and siblings, and Cesar’s cousin and family at Chili’s after everyone got off of work.  We were quite the rowdy bunch, I must admit.  Between Sophia screaming, Brandon and Yere running around and laughing, and trying to communicate from one end of the fifteen foot long table to the other, we got pretty loud.  Luckily, no one seemed to mind.  We ate dinner and some of us (all of which were of the male gender) had a couple drinks, then had the whole serving staff sing “Happy Birthday”.  It ended up being a pretty good dinner for good ol’ Chili’s.

After dinner, we all headed back to our house for some good old fashioned cake and presents (and running/crawling around screaming like crazy people for those under the age of 8).  We were all pretty stuffed still from dinner to eat much of the ice cream cake I bought, so most of that ended up squished in a Tupperware container in our already-overcrowded freezer.  Cesar got some nice cards and gifts, then we shooed everyone out because at that hour (11pm…when the party was just getting started in college!), it was time for bed for these old farts (haha!)!

Saturday, we decided to go over to Orlando to go to SeaWorld for a few hours.  We got to Orlando at lunchtime, and went to Sweet Tomatoes for lunch (which by the way, was really good) since I’d never been.  As we were leaving though, it started pouring.  After “waiting it out” for a half an hour, we looked on Cesar’s phone, and that rain was just not stopping any time soon.  So on to Plan B…off to Ikea we went!  I love Ikea, but always end up spending so much money on stuff we don’t really need.  This time was no exception.  Two hours and $100 later, out we came with our big blue bag full of…a toilet cleaning brush and some AAA batteries?  We got a few other random things, but I’m still unsure as to where our $100 went.  Haha.  The rain was still going strong, so we decided just to head home.

Cesar came up with the idea of going to dinner and the movies, you know, since it was still his birthday weekend, and since apparently a birthday is not enough.  So, we dropped Sophia off at Cesar’s parents house and headed to the movies.  We saw “The Hunger Games”, which neither of us had read or had any idea about.  We both liked it, but were both a little confused by the whole thing.  Maybe I’ll read the book and it’ll make more sense.  We went to Bubba Gump’s for dinner, then back to pick up our pretty girl.

Today, we went over to Cesar’s parents house for a cookout for- you guessed it- Cesar’s birthday!  Both of our families were there and some friends.  It was a nice day, so we sat outside for hours talking and laughing and letting the kids play.  We left once it got dark, came home and started winding down for the night.

It’s crazy how much different of a celebration birthdays are nowadays.  Now that we are married and have Sophia (not to mention, we’re out of college), a “craaaazy birthday weekend”  is no longer defined by getting “wasted” and going crazy, but by sharing two rounds of 2-for-1s at Chili’s instead of one.  But, I don’t think either of us would change it for the world!