Sophia’s First Trip to the Beach

Cesar and I have been wanting to take Sophia to the beach for a while now.  But until yesterday, it just hadn’t happened yet.  Last summer, Sophia was only a couple months old, and we didn’t want to bring her when she was that young.  Then, it was way too cold for a few months (you know, like…in the 60s!).  And after that, we’ve had something going on every weekend.  Finally, a nice day coincided with a Saturday that we had nothing going on, so to the beach we went!

When we got there, we put Sophia in the sand to crawl around, and she did not know what in the world to think!  She crawled straight toward me and wanted me to pick her up.  She just stared and stared at her hands, just as confused as could be! 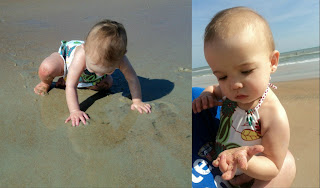 I put her back down and we walked toward the water, and she followed us to the edge of the water.  Again, she just looked at us like, “what the heck is all this stuff!?”  But, soon enough…she was actually having fun!  She was splashing and digging in the sand and crawling around.  And fake laughing (the middle picture). 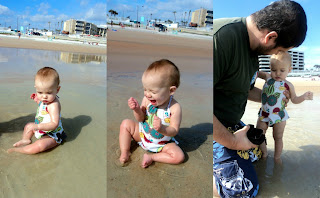 We only stayed at the beach for about 45 minutes.  Even though it was only 10am, it was a little hot for Sophia.  We wrapped her all up in her towel (a hand towel…perfect size for her!), and we were on our way home! 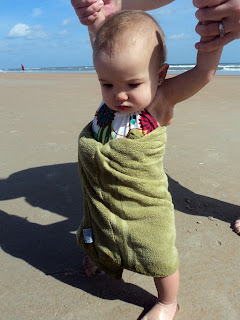 We will definitely be going back soon (hopefully next weekend!), and hopefully she will get used to it and love it!  I have lived near the beach my whole life and have never really taken advantage of it…I really want Sophia to love it!