The past few months…

Well, hey there!  It’s been a little while, huh?  Well, I really have no excuse other than that life just got in the way over here.  Strange how that happens!  I guess I have a lot to catch you up on…you’ve missed a lot.

I’ll do a quick little run through of the past few months.

Sophia’s First Halloween
The weekend before Halloween, we wanted to take some fall pictures of Sophia, so we took her to a local church that had a pumpkin patch, gave them a donation, and snapped away.  We got such cute pictures!  For Halloween, Sophia was the cutest little ladybug I’ve ever seen.  We went “trunk or treating” at a church with Cesar’s cousin Jorge, his wife Edith, and their two kids Yere and Brandon.  Yere and Brandon had lots of fun, and Sophia was just very confused.  She didn’t know why we were walking around looking at all these crazy looking people, and especially didn’t know why she had antennas hanging off her head.
After trunk or treating, we went to visit my side of the family at my Nanny’s house.  Nana and Pop got Sophia a little “First Halloween” gift, and so did Nanny.  She enjoyed getting to sit on the dining room table and play with her new toys while everyone else enjoyed rummaging through her stash of candy. 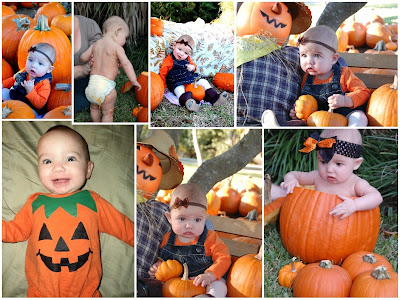 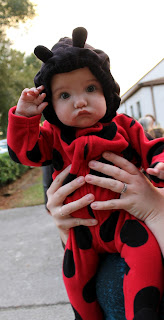 Sophia Met Abuela for the First Time
Sophia has known her Nana, Pop, and Abuelo since she was born.  Unfortunately for everyone, her Abuela (Cesar’s mom), was not able to come from Venezuela until the beginning of November.  She had only met her through Skype prior to then.  Let’s face it though…while Skype is better than nothing, it is definitely not the same as being able to hug the person on the other side of the computer.  I’m sure it’s especially true if that other person is your first grandchild.
Clara (aka Abuela) landed in Orlando late on a Friday night, and Cesar, Oswaldo (Cesar’s dad), Sophia, and I were there waiting for her.  She was very emotional, but as you can probably tell by the pictures, Sophia wasn’t sure what to think! 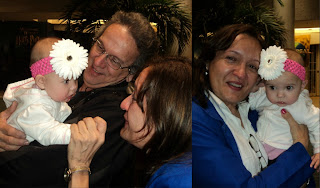 Sophia Went to “Disney” for the First Time
First things first…”Disney” is in quotes because when I say Disney, I don’t mean the Disney parks, but Disney property in general.  Cesar had a half day of work a few weeks before Christmas, so Sophia and I rode to Orlando with him for the day.  When he got off work, we went to all the Disney hotels and campground, rode the monorail and boats (which Sophia loved…until she spit up all over the place in the monorail, and we realized we left the burp cloth in the car), and went to Downtown Disney.  We used to do that all the time when I was a kid, usually with my Grandma and Granddad, so it was super fun to do it with my own daughter!  Everything was decorated beautifully for Christmas.  Afterward, we went to Rainforest Cafe in Downtown Disney for dinner, which Sophia thought was the best thing ever.  She loved the “thunderstorms” and looking at all the fish in the aquarium, especially. 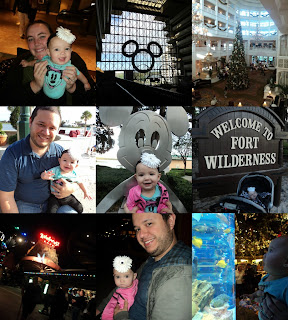 Sophia’s First Christmas
Since last Christmas when I was pregnant with Sophia, I have been dreaming about her first Christmas.  I dreamt of Sophia waking up at the crack of dawn on Christmas morning, begging us to get up so she can go through her stocking and see what Santa brought her.  Well, apparently I wasn’t thinking straight…I guess they call it pregnancy brain.  Ummm, at 7 months old, Sophia wasn’t quite old enough to wake herself up from excitement of the day to come, get herself out of bed, and come bug the crap out of us til we finally got up (not that my brother and sister and I have ever done that…hah!).  She wasn’t old enough to go through her own stocking or to be extremely excited about all the stuff Santa brought her.  True, she would have rather played with the boxes and wrapping paper and bows than with the toys that we spent all this money on.  But you know what?  It really was the best Christmas ever, even if it is just because she was here with us.  And after I threw away all the trash she was playing with, she actually did like all of her toys!  It was a long day for all of us (especially Sophia), but it was so much fun. 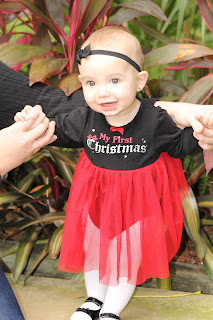 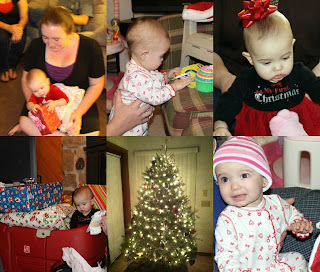 Sophia’s First New Year
We spent the whole New Year’s weekend in Tampa with Cesar’s parents and brother.  On New Year’s Eve day, we went to Busch Gardens, and stayed until after midnight so we could watch the fireworks.  They had a stage set up in the fields in the back of the park, with a concert going on for several hours before midnight and we had a good time singing along to all the songs the band played.  I think we wore Sophia out…she was asleep by 9pm.  Luckily for us, her stroller can lay completely flat, because it was a very long day for her!  We woke her up at 11:59pm to watch her first New Year’s fireworks (which she really didn’t end up caring too much about).  We also called my brother’s phone on FaceTime right after 12:00am, so we could say Happy New Year to Nana, Pop, Uncle Garrett, and Aunt Jess.  What a way to bring in the new year though…with my awesome husband and my beautiful little girl! 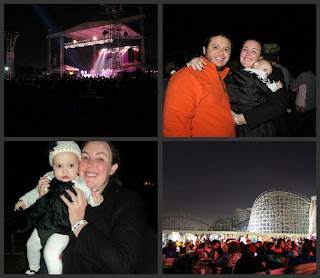 Well, I think I’ve pretty much caught you all up on our lives for the past few months.  I promise, promise, promise I’ll try to be a better blogger and update a little more often than every 4 months!